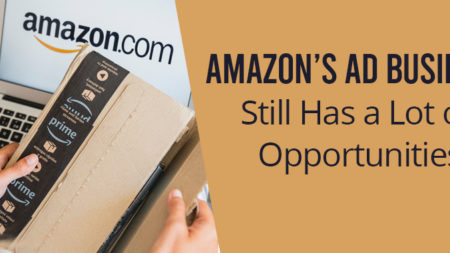 Amazon Ads business has made millions in the previous years and Amazon still has a fair chance to soar high in the Advertising world.

Amazon first started up in the year 1994 and they were publicly established in the month of May 1997 by selling books online in the UK and Germany.

And now Jeff Bezos has expanded its business to massive scale. Amazon is said to be the world’s largest e-commerce platform and not only that they have also acquired other technological advancements like cloud computing and AI assistance.

Amazon is the largest company dealing with the Internet in terms of revenue.

Amazon started working as an advertising giant since the last few years and it started growing exponentially.

In the fiscal year, 2018 Amazon ads business revenue increased by 129 percent compared to the previous year.

But the metric suggests that Amazon Ads sector is gradually slowing down. But Jeff Bezos can still figure out a way out of it, as it is among the top ad business in the U.S.A.

Amazon’s top minds are currently working on how to check the current situation and Amazon ads business still has a lot of opportunities to grab again. They are working on self serve programmatic advertising and trying to make a bigger impact on the advertising world again.

It is estimated to grow to $10 billion leaving both the grand technology companies Google and Facebook behind.

Amazon is aggressively planning to expand its business and is making sure that more brands start buying ad space on his website. In order to do that, it has to start working with Ad-tech agencies and media companies to build platforms.

Ability to programmatically buy ads on Amazon’s ad business is going to change the game.

For example, Facebook made half of its advertisement revenue outside the U.S.A.

More than half of the world know Amazon and it’s grandiose. And more or less every business can be approached by Amazon ads sector. This way they could reach at least 1/4th of total business and start generating double the revenue and even more.

Enhanced Video Advertising – Amazon is counting on Video ads more than anything. It has come with a major change to it’s Fire TV platform. Fire TV now has ads on its home screen which customers can buy through Amazon ad platform. The company has spent a lot of time this year researching and implementing video ads.

There are contenders like Fire TV and Amazon Prime has original programming and video on demand from outside studios. Other ideas include running ads inside some channels that are available through Amazon’s video-on-demand platform.

Sponsored Ads – While searching for a product on amazon, you may have noticed “sponsored” tag with the product label. These sponsored products let other advertisers promote certain products.

Here bidding plays an important role. Advertisers basically bid on a particular keyword and the ads with more bids are supposed to be displayed. Advertisers will only pay when someone will click on the ads and they decide the maximum amount that they are convenient with.

These ads could shoe up anywhere like around or within the search results and even on products details pages.

Amazon is dedicatedly planning to strengthen its place in the advertising market place.

Other ad types for Amazon – Amazon also sell “display ads” .You just need to choose the right kind. These basically are image ads that can appear on Amazon or Kindle while you shop. It can also appear on a third-party website while you are going through an article.

Then there are video ads which come up on Video content all over Amazon sites and even of Fire TV. Display and video ads are not only meant to sell a product, but it also appears on Amazon and other third parties apps.

Customers are even approached on third party sites and advertisers use a term called DSP (demand-side platform ). It simply means advertisers can choose what kind of audience they want to reach.

These are the categories of advertisements Amazon is focussing on. It is still growing healthy.

Amazon has already started ramping up its ads work growth but there are more surprise yet to come. Amazon is trying to engage as many people as possible with its products which can, in turn, accumulate a larger audience base for marketers to advertise.

We have talked over how Amazon Ads Business still has a lot of opportunities left and how are they planning to expand their ad business in the future and stand out as a multibillion-dollar industry. Pivotal Research Group remain confident enough and wants to go for the best strategy of marketing. There is a lot of room for opportunities that Amazon could grab.

Recent Posts
Categories
© Copyright 2018 MyBlog 2 U. Designed by Space-Themes.com.
MyBlog 2 UGet to know the real ones